Recently I have been studying product launches, such as Fast's and Airtable's. When I noticed Mailchimp's Fall Release, I knew I would want to study it because there should be several valuable lessons. I was not disappointed. Here's what I found:

I first learned about bundling features into one announcement from a blog post by Intercom's Group Product Marketing Manager Jasmine Jaume, How to evolve product launches as you grow:

If you’re in a fast-growth product company, it’s likely that your R&D team is shipping regularly and, of course, you’ll want to let your customers know about all these great new features. But at some point you risk overwhelming and annoying your customers, and they may start ignoring your announcements altogether.

By bundling related features into one announcement with a specific theme, you can not only avoid this over-communication, but also tell a much stronger, more cohesive story.

This doesn't only apply to fast-growth product companies. Buffer isn't a fast-growth product company but we have reached a point of having multiple product teams. So sometimes we do have updates and new features that are shipped relatively close to one another. This has given us the opportunities to bundle them (though we have not because either it didn't make sense or we didn't spot the opportunity).

Jaume shared an example of bundling two app updates and a new calendar feature into one announcement. Instead of announcing them separately and doing two to three product launches, the Intercom team combined them into an announcement about making call and demo booking easier so that users can focus on selling and not scheduling.

Jaume went on to share a few tips for effective bundling:

It's interesting to compare these tips with Mailchimp's Fall Release, which is one massive announcement for a dozen of features.

The first thing I noticed is Mailchimp didn't have an overarching theme. The team chose to combine the features into a seasonal release, which is both weird (because they release new features continuously rather than once per season) and smart (as I'll explain in the rest of the essay). One potential angle they could have used is to focus on selling online because many of the new features are for e-commerce (e.g. its smart recommendations and customer journey builder). Furthermore, due to the COVID-19 pandemic, many small businesses were forced to sell online—a fact that Mailchimp themselves have acknowledged in the announcement—so it could have been a timely angle, too.

But it is easier said than done. Because Mailchimp started out more as a newsletter tool than an email marketing tool, its best customers were nonprofits and not e-commerce businesses. If they had taken an e-commerce angle, that could have alienated their other customer segments. On the other hand, this could have helped attract more e-commerce businesses, which seem to be their new target customers. This is a hard question that product marketers have to deal with regularly: do you send out a generic message that works for all types of customers or do you write a more compelling message for just one particular segment? To me, it feels more like art than science. It depends on the particular features in question, the company strategy, and the marketing strategy.

Include relevant features, not just new ones

Another thing I noticed about the announcement is that it also included old features and upcoming features.

This contradicts Jaume's final tip on effective bundling to "make sure the features in the bundle are coming around the same time." It also goes against the norm of launching only new features. Just last week, I discussed how Airtable was able to perfectly time several big announcements on the same day—funding round, major product update, a new marketplace of apps, and TechCrunch coverage—which is extremely hard to execute.

After studying Mailchimp's announcement, I realized there is another approach and product marketers don't always have to try and time the release of multiple features. To be clear, if you are able to launch multiple new features together, I think that is the best. It will have the biggest impact. But for most startups that don't have multiple features in the works at once or are unable to perfectly align their releases, we could re-launch old features and preview upcoming features when launching new features.

The Mailchimp team managed to bundle new, old, and upcoming features effectively in their announcement. For instance, features such as Send Time Optimization, Purchase Likelihood, and Product Recommendations have been available for a long time but it makes sense to feature them alongside new features (Subject Line Helper and Next Best Action) under the umbrella of Smart Recommendations. 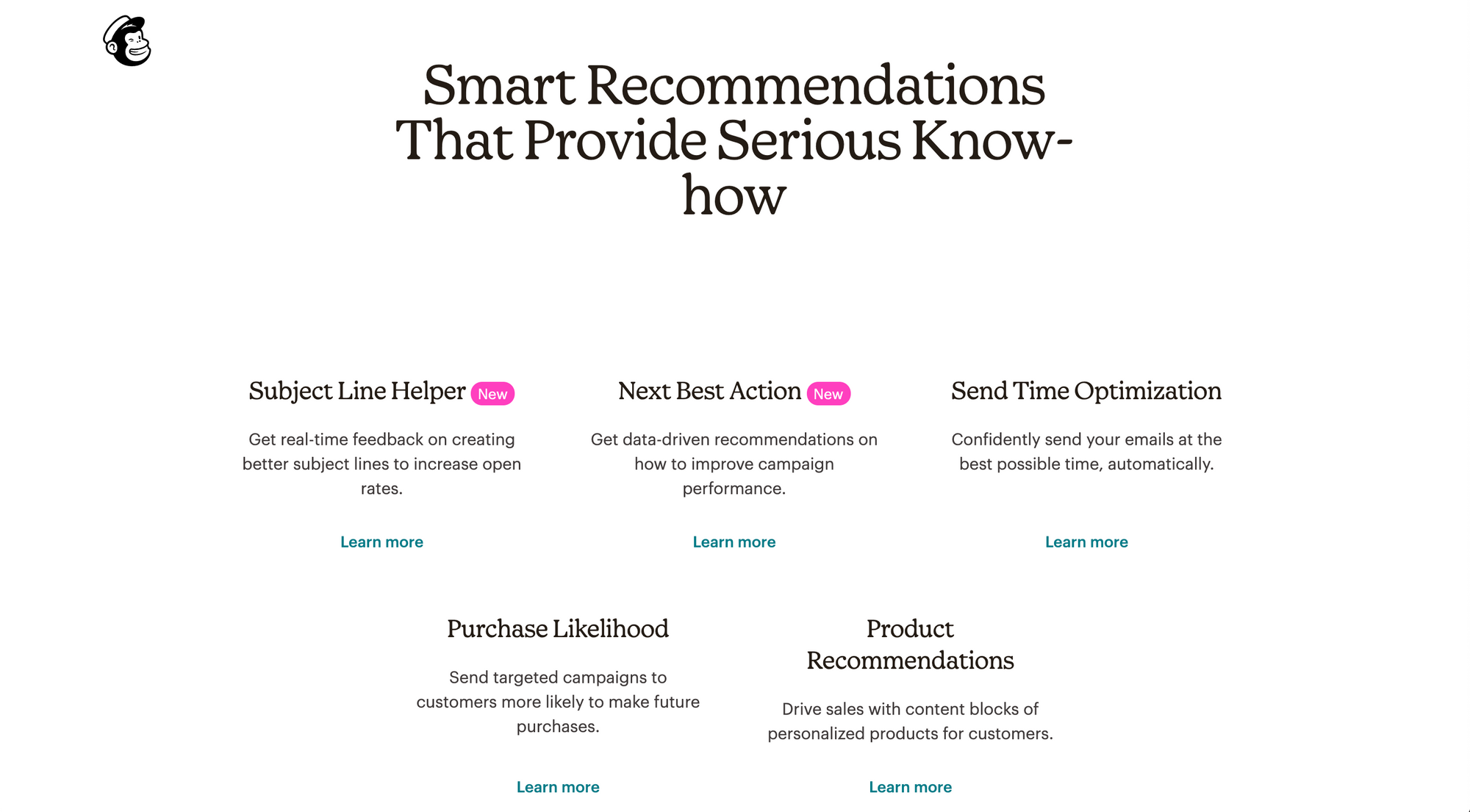 Here's another example: instead of simply stating the new surveys feature, Mailchimp talked about establishing, connecting, and growing your audience. Under this story, Mailchimp tells you that you can use pop-up forms to capture visitors' attention (old feature), collect feedback via surveys (new feature), and let customers adjust their communication preferences (upcoming feature). My hunch is it's easier for customers to remember a story than a standalone feature. At the same time, Mailchimp could remind customers about old features and highlight upcoming features. Triple win. 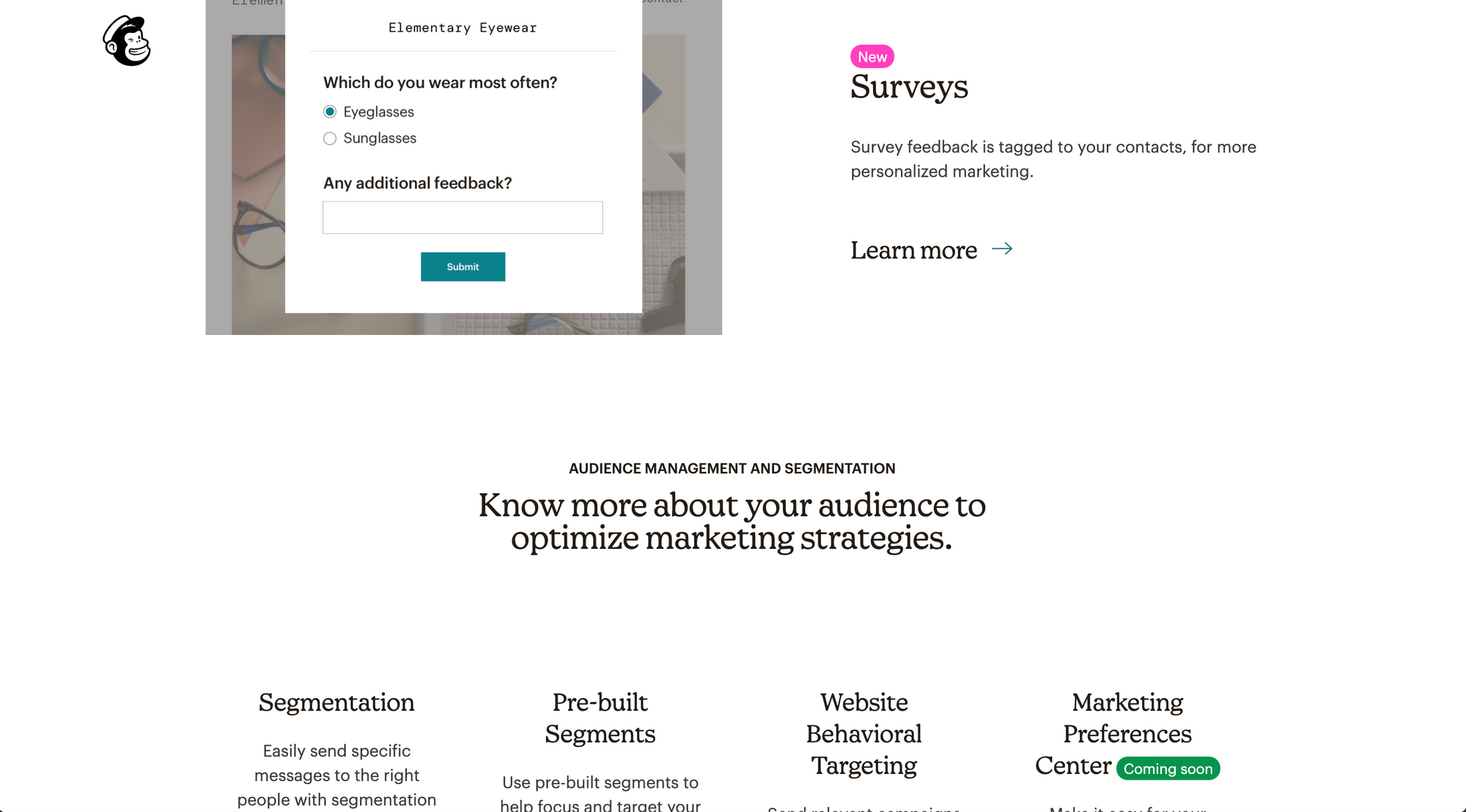 I have been thinking about this for an upcoming launch. We are building analytics for LinkedIn Pages in Buffer. Instead of simply launching that one feature, I think it's an opportunity to try what Mailchimp did and bundle new, old, and future features into the announcement. One challenge we have been facing is that people still think Buffer is only for social media scheduling, and we have been trying to highlight our robust analytics and reporting features. Rather than saying, "Hey! We now have LinkedIn analytics in Buffer," I believe it will be better to frame it as "we now have a complete social media analytics in Buffer" and talk about the LinkedIn analytics (new feature) but also other relevant features, such as analytics for Facebook, Instagram, and Twitter (old features) and improvements to the report builder (upcoming features). This will also match what our target customers are looking for. They aren't looking for just LinkedIn analytics, and they likely won't pay for Buffer just to use LinkedIn analytics. Our customers pay for Buffer because they want a single tool to manage multiple social media channels. Thus, the broader framing could be more effective.

I used to worry that if I launch a feature multiple times, I would over-promote and annoy our customers. I now think it is okay, or even recommended, to launch major features multiple times because:

When we are planning a product launch, it will feel like this big thing. There will be emails, social media posts, ads, in-app messages, etc. Everyone will hear about it. But it is more likely that many people will miss it. They live in their own world with their own concerns, not in our product or our social media feeds. And they don't just see our marketing; they see marketing from countless brands every day. To me, the launch is everything. To them, it might just be an email they didn't even open. A case-in-point: I have been using Mailchimp twice a week for the past six months to send Yeti Distro essays. Yet I didn't know about some of these new features. By announcing new features several times, we can ensure more customers know about them.

When I dug into Mailchimp's Fall Release announcement, I noticed that several of the features have been launched multiple times:

But there's a catch. We shouldn't simply repeat the same message multiple times. Or we will annoy our customers. Mailchimp did a great job giving the new features a different angle each time. Let's take Smart Recommendations for example:

What do you think about bundling features for product launches? What companies have done this well? I look forward to discussing this with you via email or on Twitter.